Glenn Choe is Selected as a 2020 Young Artist Competition Winner! 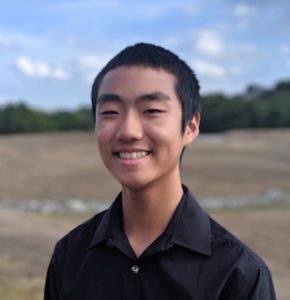 Glenn Choe, age 15, is a sophomore at Vista Ridge High School in Cedar Park, Texas. He began percussion when he joined the middle school band program, and has now been playing for five years under the direction of Hector Gil in both middle school and high school. As he chases his passion in percussion, he is continuously learning, challenging himself, and becoming inspired by the many different aspects of music.

On top of his individual accomplishments, he also loves to perform with his very active school band program. He played marimba in the 2019 marching band show ‘Turning the Tables,’ which won the BOA Midland Championships, and also played xylophone in the 2018 show ‘Lost and Found,’ which won the UIL 6A State Championship. He also played in the 2018 Percussive Arts Society International Convention (PASIC) with the Vista Ridge High School Percussion Ensemble, at TMEA with the Henry Middle School Honors Band in 2018, and at Midwest 2016 with the Henry Middle School Honors Band. He is constantly inspired by the infinite world of music, and the many different genres, musicians, and styles that it has to offer. Jealous of the hundreds of years of classical history that other instruments have, unlike percussion which has really only been developed and explored in the last one hundred years, Glenn finds a lot of his inspiration from other instruments, and he hopes to one day apply the level of expression and quality of sound they’re able to make onto percussion instruments.

Glenn has also been a volunteer teacher in the nonprofit student-led organization ‘Music Eunited,’ where he has been teaching percussion to physically or financially challenged young students for three years.  In his free time, he enjoys relaxing with his family and friends, drawing, and sitting on his phone as most teenagers do.Starlight Symphony Orchestra’s Young Artist Competition is held each concert season and invites exceptional young instrumentalists, of all ages up thru high school seniors to compete for music scholarships towards their education in music. The top performers are selected as the featured soloists for the Young Artist Concerts held in the spring each season.  The solo competition is open to all orchestral instruments, including brass, percussion, piano, strings, and woodwinds.  Suitable pieces are solo works intended to be performed with orchestral accompaniment.