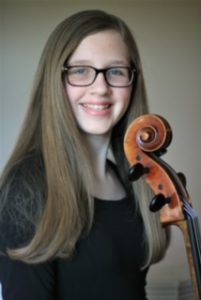 Lauren Mathews, 16, is in the eleventh grade at Seven Lakes High School in Katy, Texas. She currently studies cello with Brinton Smith, principal cellist of the Houston Symphony and Sami Myerson Khang. Lauren began studying cello with Donna Rogers at the age of 5. As a 9th grader, Lauren was named a 2018-2020 Texas Young Master by the Texas Commission on the Arts and received a grant to further her cello studies. Lauren was accepted into the New York String Orchestra Seminar in December 2019 and performed with the orchestra in Carnegie Hall. She has recently won the Houston Civic Symphony Concerto Competition as well as First Prize in the Juanita Miller Concerto Competition.

Lauren has also won concerto competitions and performed as a soloist with Symphony North of Houston, the Houston Civic Symphony, Energy Corridor of Houston Orchestra, and the Houston Youth Symphony Philharmonic Orchestra.  Since 2012, Lauren has been a member of the Houston Youth Symphony. Lauren earned a top spot in the Texas All-State Symphony Orchestra in 2018, 2019 and 2020. In January 2018, Lauren performed with the Esperanza Trio on the Houston Young Artists’ Concert at Rice University. Since 2010, she has earned superior ratings with honors at the ASTA Certificate Advancement Program. Lauren has attended summer festivals at The Meadowmount School of Music, Bowdoin International Music Festival, The Eastman Cello Institute, and The National Cello Institute. In her free time, Lauren enjoys working with the Back to BACH Project which helps to inspire a love of music in young children and promote arts education.