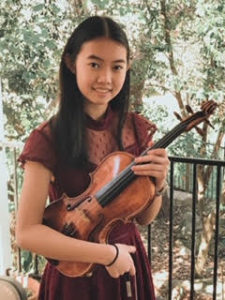 Sophia Louie, age 14, is a freshman at Westwood High School. She started playing violin at the age of 8 with Dr. Amy Harris. After playing for only 2 and 1/2 years she was awarded Honorable Mention in the 8th Young Musicians’ Festival Competition. Since 2016 she has been studying with Dr. Alexander Serafimov who has taken her playing to new heights, helping her become a more complete violinist and musician. In 2019 she won first prize in the Blackerby Young Violinists Competition, second prize for Great Composers Competition – The Art of Strings and most recently, first prize for Great Composers Competition – Best Beethoven Performance. She is honored to be chosen and thrilled with the opportunity to play with the Starlight Symphony Orchestra.

Sophia is also currently a member of Westwood High School’s Symphony orchestra, their top orchestra, under the direction of Mr. Joshua Thompson. This highly acclaimed orchestra just recently returned from the 2019 Midwest Clinic in Chicago where only two full high school orchestras in the nation were selected to perform at the Clinic. She has also performed Chamber Music as part of a quartet in the Chamber Music in Public Schools (CHAMPS) program giving multiple public performances throughout the Austin area.