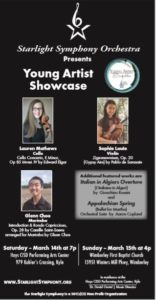 The level of artistry our young artists have achieved, at such a young age, is staggering. In this concert series you will hear some memorable performances by three highly talented and charming young people. Our competition was held on Saturday, January 4th – just a few short months ago. We had 38 contestants audition. At the risk of sounding repetitive, each of these kids could easily share the stage with us. It was a hair splitting decision and we narrowed it down to the top stellar three. Lauren Mathews masters the sophistication of Elgar’s cello concerto. Sophie Louie aptly captures the gypsy songs of the Spanish composer Sarasate, and Glenn Choe displays choreographed musical precision in a work by Saint-Saens that he transcribed from violin to marimba.

Here is a little bit about each work.

Giochino Rossini’s Italian in Algiers was part of a string of successes that he enjoyed as a young composer in Italy. Rossini wrote 34 operas in a matter of 13 years. The last 40 years of his life showed very little compositional output, perhaps because of his early success and acquired wealth, or because of poor health. The reason will remain unknown. Nonetheless, his operas and overtures are still performed and part of the standard repertoire.  He wrote Italian in Algiers when he was 21 years old and took him a mere 18 days to complete. This work is noted for mixing the serious and comic opera styles.

When we heard Lauren Mathews audition on Edward Elgar’s Cello Concerto we were impressed with her mastery of such a complex work.  This work was Elgar’s last notable work and arguably the cornerstone of the solo cello repertoire. The concerto had a poor first impression likely because the premier performance lacked in proper preparations. Presumably because of this, it did not gain popularity until the mid 20th century when it quickly became a classical favorite among cello soloists.

Sophie Louie’s audition on Pablo de Sarasate’s Zigeunerweisen earned her a top spot because of her sensitivity to the essence of this style of music. Sarasate was a Spanish Romantic composer and virtuoso violinist. This work premiered in Leipzig, Germany in 1878 and is among his most performed works and is a favorite with violin virtuosos. Zigeunerweisen is in one movement but can be divided into four sections: Moderator, Lento, Un poco più lento, and Allegro molto vivace. Note the demanding left-hand pizzicato toward the end.

Upon hearing Camille Saint-Saens’ Introduction and Rondo Capriccioso as auditioned by Glenn Choe on Marimba, we were impressed with his musicianship, sensitivity to the musical style, and artistry on his instrument. The Introduction and Rondo Capriccioso is among Saint-Saens’ most popular violin works. An interesting note, Saint-Saens wrote this work in 1863 specifically for the virtuoso violinist, Pablo de Sarasate, which is the composer of the work performed by one of our winners on this same concert! Although it was written for violin, Glenn Choe, the performer on the piece, arranged it for marimba. The challenging rapid arpeggios and chromatic passages can be heard on the marimba while the orchestra harmonically supports the soloist with block chords.

The final work in this concert series is Aaron Copland’s Appalachian Spring Orchestral Suite. This would easily be the cornerstone work and overwhelm any concert because of its huge popularity and demanding iconic rhythms. However, it pales on this concert because of our stellar soloists. Albeit, we will wrap up this program with this significant work. Appalachian Spring was originally commissioned as a ballet and it met with great success. Because of this, Copland received yet another commission to rearrange it as an orchestral suite. As prefaced in the score, “…It is a condensed version of the ballet, retaining all essential features but omitting those sections in which the interest is primarily choreographic.”  This suite uses quintessential Copland Americana themes and styles, most notably are his wide open solos with minimalistic harmony and rapid meter changes likely depicting the early American wild west. In 1945 Appalachian Spring received the Pulitzer Prize for music as well as the award of the Music Critics Circle of New York for the outstanding theatrical work of the season of 1944-1945.

Congratulations go to our three winners of the 2020 Starlight Symphony Orchestra’s Young Artist Competition, Lauren Mathews, Sophie Louie, and Glenn Choe. This is a glimpse into the future and a bright future it is for these young musicians.